A place to post misc. feedback to individual eps.
Forum rules
We'd love to have you Reply to posts in this Forum, but please don't create new Topics here. One exception: If we haven't created a thread for a particular episode, feel free to get it started. For other subjects, I suggest creating new Topics in Virtual Hangar=>Other Topics. Thanks.
Post Reply
8 posts • Page 1 of 1

Welcoming back Dave Higdon who missed Oshkosh... A sorta-replica Wright Flyer is being built... One last look back at OSH14... An OFLOTW on a narrow street... FAA Shenanigans... A mysterious F-15 crash... All this and more on the Uncontrolled Airspace General Aviation Podcast. Recorded August 28, 2014. Alt titles: "get out the 30-weight" "get your thumb out"
Top

Re: the F15 accident

It's not uncommon for military types to use depleted uranium at various locations on the airframe (for trim weight if I recall correctly). This then poses a big issue later if someone wants to de-mil a jet to have a pretty warbird.

This link to another forum has good info about the decision from above that 'Nah, you don't need that when you are flying around here'. Standby for that one to be reversed quicksmart!

Although the chair is released when the main chute inflates (so the pilot can land without it) there is normally a good quantity of equipment in/on the chair itself. So if I was the driver and able to move around I'd be after that chair pretty quick smart!

I recently was at the Australian National Air Museum at Moorabbin (YMMB) which has the pod off an F111. That's the way to eject, take the cockpit with you!! Somewhat similar to the Cirrus SR20 I fly with the airframe parachute.
Here's a photo of another F111 pod for those not familiar: 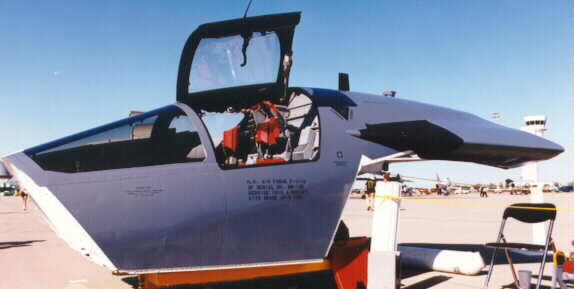 Jack
I thought you almost caught the home building bug on the One Week Wonder. I agree with Dave that the administrator going over and pulling a rivet for show and then telling us building an aircraft is not an aeronautical use of a hanger is chicken----. If I had not found a hanger to rent when I started my Zenith CH650 I wouldn't be building.(from plans to keep the cost down) I shouldn't have too leave the investment of my vehicles outside for several years because it doesn't look like an airplane yet. I would love to hear your comments on Mac McClellan's blog comments that the type of people who founded the organization he works for should be put off the airport for someone who can throw down a couple hundred grand for an airplane. There are a lot of people that love aviation who don't have those kind of finical resources. Building is their only option to get something more then an ultralite and keep their maintenance costs down. They whine about a declining pilot population, then think a road block like this is the way to go.

I got a big kick out of your take on "The VSI went to zero!"

It reminded me of one of the platitudes you'll hear at the pub when glider pilots gather to tell their stories:

I always thought gas was about half the cost of flying so was willing to let a rider pay for all the gas. Guess that fixed costs aren't included in "FAA Think". Not much of a problem in my case because most folks can scrounge a lot classier ride than the back seat of a Champ, so few takers anyway.
On the other hand a friend recently got busted for giving pay for transport rides without a current medical in a probably uninsured C-310. He even had an office in a nearby municipal FBO. Always a bit of a wild child, with stories and real experience to learn from, it was about time he got shut down. The FAA is responding to a real issue on this one.
Remember, not all who wander, are lost.

Re: Compensation vs. Charity

I recall there was a case where a pilot (ATP rated IIRC) was ferrying people to a persons island for a party. When the FAA got wind of this, the flights were considered commercical (and the pilot penalized) because the pilot received compensation from the person owning the island in the form of good will. So money doesn't have to be exchanged for compensation to occur.

Not saying that I agree with this standpoint by the FAA, but I understand where they're coming from, and this does seem to be in line with previous ruling/thinking.

And it was chicken<outer marker tone> to wait until after AirVenture to announce this.

A careful reading of the FAA letter https://www.scribd.com/doc/236884814/FAA-Ruling-Banning-Planesharing indicates that "...a pilot may accept compensation in the form of a pro rata share of operating expenses for a flight from his or her passengers..."

However, the "holding out" or offering transportation in return for compensation is where the FAA gets sticky. The original concern with pilots offering transportation for compensation was the possibility of their putting the early, fledgling airlines out of business. Safety and certification issues came up much later. Today, the FAA seems to be stuck on this like an old 78 rpm record player -- they only defend this interpretation because they interpreted it that way before.

The FAA ruling on compensation for ride-sharing on Part 91 aircraft really needs to be taken to court to dig into the issues. For example, why not bring a First Amendment challenge the FAA's right to determine whether or not pilots and passengers have or don't have a common purpose? That raises the question of where they first expressed that common purpose? Was it on an airport bulletin board? At a cocktail party? Or via Twitter/Facebook? The FAA seems to take the position that it's legal if done orally, but not if done electronically or on a cork bulletin board.

The problem is that taking the FAA to court is expensive. The plaintiff has to pay his/her lawyer, while the FAA's staff lawyers are free to, and probably will, spend the rest of their careers on your case. Still it would be good fun to listen to all nine Supreme Court Justices torture the FAA's lawyers about some of these silly distinctions.
A commercial pilot, IFR rated, who flies a Cirrus SR22 out of JYO.

..most folks can scrounge a lot classier ride than the back seat of a Champ...

Users browsing this forum: No registered users and 0 guests